Connect with your more spiritual side and discover the Golden Temple, the pilgrimage site of Sikhism that has led to Amritsar being one of the most popular destinations in India. On this tour, you'll find out more about Sikhism and you'll visit this world-renowned temple.

Connect with your more spiritual side and discover the Golden Temple, the pilgrimage site of Sikhism that has led to Amritsar being one of the most popular destinations in India. On this tour, you'll find out more about Sikhism and you'll visit this world-renowned temple. 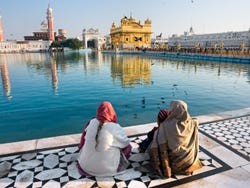 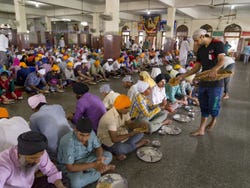 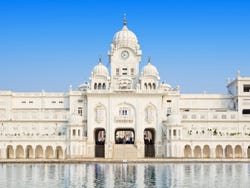 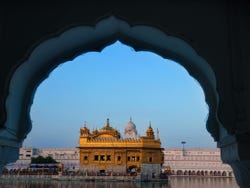 We'll start the tour at the entrance to the Golden Temple, also known as the Harmandir Sahib and the Darbar Sahib. Here, an English speaking guide will explain the history of the magical place, which is visited by Sikhs at least once in their lifetime. You'll be amazed by its beauty and the reflection of its silhouette on the water that surrounds it.

You'll be able to enter the Clock Tower, and other stand-out parts of this religious complex. Plus, you'll get to enter the famous Guru-Ka-Langar dining hall, which is accessed by some 100,000 pilgrims each day.

Next, we'll visit the nine-storey octagonal tower, Baba Atal, located just south of the Golden Temple. Built in 1784, this tower honours Atal Rai, the son of the sixth of ten Gurus of the Sikh religion, Guru Hargobind.

The tour will finally come to an end at the Sikh Reference Library and the Sikh Museum, where you'll find out more about the origins of this religion, and about how Sikhs were persecuted after the partition of British India. This will be the perfect end to a tour which will immerse you in the culture, history and religion of this country.

US$ 10.80
Free cancellation up to 24 hours before the service starts
Book

9.30 / 10 3 reviews
Discover Amritsar when you take our wonderful free walking tour around the principal landmarks and tourist attractions of the city.
Free!
Book
like

10 / 10 1 review
Discover the famous colorful turbans of Amritsar when you take our fantastic guided walking tour.
US$ 115 per group
Book
like

No rating yet
Enjoy authentic Indian cuisine with this fantastic food tour of Amritsar. We hope you're hungry, as this is a fabulous, unique gastronomic experience!
US$ 13.50
Book