Explore the archaeological site of Paestum on this excursion from Ascea and travel to the era of Magna Graecia with an expert guide!

Explore the archaeological site of Paestum on this excursion from Ascea and travel to the era of Magna Graecia with an expert guide! 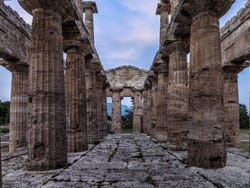 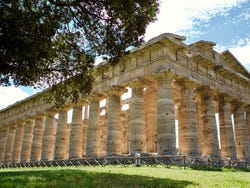 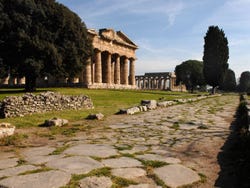 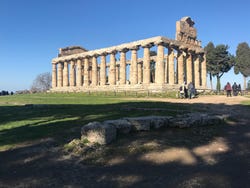 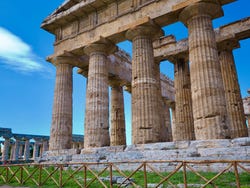 We'll pick you up at your hotel in Ascea and hit the road to the city of Paestum, declared a World Heritage Site in 1988. Ready to begin an exciting journey into the past?

Once we arrive, we'll start exploring the archaeological site of this ancient city of Magna Graecia, founded around 600 BC with the name of Poseidonia, in honor of the god of the sea. The city was then occupied by the Lucanians, who came to call it Paistom, until it became a Roman colony and took the name of Paestum.

Here, we'll visit the Doric temples of Hera I, Hera II and Athena, while the guide tells us about the characteristics of each of these buildings, standing majestically against the green background of the plain... A perfect postcard image!

Then, we'll enter the park's museum, where we'll have the opportunity to learn about the artifacts found during the excavations carried out to bring this ancient Greek colony to light. This is a vast collection of great historical and artistic value, including vases, weapons and grave goods from the Greek and Lucanian necropolis.

Among the museum's treasures, the most outstanding are the marvelous frescoes of the Tomb of the Diver, in which we see a man about to dive into the waves of the sea, a clear metaphor for the passage from earthly life to the afterlife... A unique painting that will leave you speechless!

We'll end our excursion to Paestum after four hours, taking you back to Ascea, where arrival at your hotel is scheduled for 7 pm.

Hotel pickup and drop off

Entry to the archaeological site of Paestum

US$ 51.10
Free cancellation up to 24 hours before the service starts
Book

Treat yourself to a day of relaxation and culture on this Amalfi Coast excursion from Ascea. You'll visit the historical center of Amalfi and explore the beautiful town of Ravello!

Explore an unparalleled architectural treasure in the province of Salerno with this excursion to the Certosa di Padula.

Discover two incredible places in Campania on this excursion to Pompeii and Mount Vesuvius from Ascea. An unmissable tour full of history and nature!