Explore two of the best universities in the world with this guided tour of MIT and Harvard. You'll stroll through each campus just like a prestigious Ivy League student. 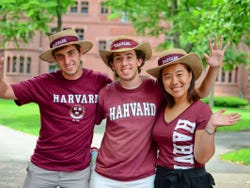 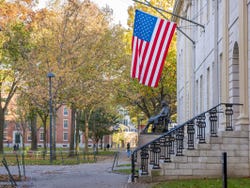 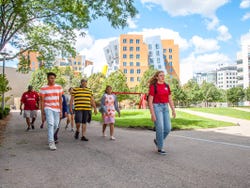 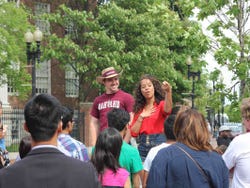 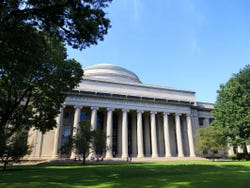 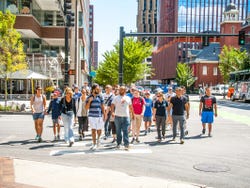 At the selected time we'll meet at the Harvard subway stop, and begin the campus tour with a university student guide. We'll start with the John Harvard statue, who was the university's first benefactor. Did you know that students tend to touch the statue's foot for good luck?

From there we'll walk to the Memorial Hall and pass by the Widener Library, the largest on campus, which contains over three million books. We'll discover some of the student traditions while we head to the Harvard Lampoon, the offices of the student magazine. Many former US presidents wrote in the publication, can you guess who?

After an hour and ten minutes, we'll finish the tour at Winthrop Park. You'll then be free to head down the road to the best technology university, MIT (Massachusetts Institute of Technology).

Your guide will be waiting for you at Kendall Square. They will take you to the Strata Centre, a colourful deconstructed building, and the Green Building, the tallest structure on campus and in all of Cambridge. This is where some of the most famous astronauts studied!

Next, we'll stop in front of the Great Dome to find out about campus life at MIT, and then head towards Lobby 7. Did you know that MIT students created traffic laws for the Infinite Corridor that runs from east to west because of the endless flow of students?

Here we'll end the tour after one hour and ten minutes.

This guided tour is carried out in English, but at Harvard there are written translations in Spanish, Chinese, German, French, and Italian free of charge.

When making your booking, you'll be asked to select the day on which you'd like to do the guided tours. The exact tour times are flexible, but Harvard must be visited first.

Map of Cambridge and Boston.

US$ 25.98
Free cancellation up to 24 hours before the service starts
Book

I really enjoyed our visit to Harvard, but the best one for all of my group was the M.I.T. one. Was simply amazing!!

No rating yet
Discover the capital of Massachusetts at the most magical time of day with this Sunset Boat Cruise. You'll be enamoured with the scenery and iconic landmarks.
US$ 38.80
Book
like -9%

8 / 10 6 reviews
The Go Boston Pass is a tourist sightseeing pass with free access to over 40 attractions in Boston, including the Fenway Park and the Salem Witches Museum.
US$ 76 US$ 69
Book
like

No rating yet
Discover all the charms of Boston in a unique, quick way when you take our fantastic trolley tour.
US$ 40
Book