Phoenicians, Romans, pirates... vestiges from almost every era of history meet in the beautiful historic centre of Cádiz. Discover one of the oldest cities in the world on this walking tour!

Phoenicians, Romans, pirates... vestiges from almost every era of history meet in the beautiful historic centre of Cádiz. Discover one of the oldest cities in the world on this walking tour! 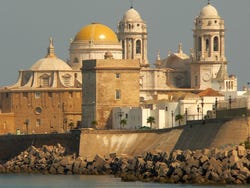 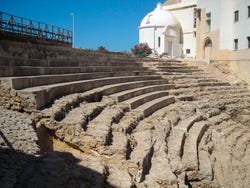 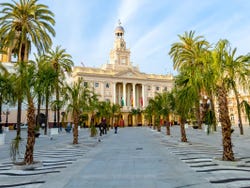 Meet your guide in the Plaza de San Juan de Dios, an important square in the heart of Cádiz old town, where our walking tour of this charming city's fascinating history will begin.

Firstly, we'll hear curious facts about the origins of the city, whose foundation dates back to Phoenician times, while we admire the façade of the Cádiz City Hall. We'll then stroll over to the Arco de los Blanco, an archway that was part of an ancient Roman wall, allowing us to discover more of the city's history. Not far from here, we'll see one of the main archaeological sites of the Barrio del Pópulo neighbourhood: the famous Roman theatre of Cádiz, an emblematic monument of ancient Gadir.

After walking along the narrow Callejón del Duende and discovering the mysterious legends that surround it, we'll reach the Casa del Almirante, an important landmark in understanding the role that the merchants to the colonies played here. We'll then get to admire one of the old town's most beautiful churches: the Cádiz Cathedral, officially the Cathedral of Santa Cruz.

Our walking tour of Cádiz will come to an end around the Plaza de los Flores, after visiting the nearby Central Market, home to a number of enticing food stalls, including stands selling the famous tuna from the bay of Cádiz.

We were sad that we couldn't see the cathedral. Fernando, our guide, very good. Opinion translated. Show original.

9.30 / 10 4,191 reviews
What better way to get to know Cadiz than by taking a guided tour with a local guide?! On this free tour, you'll visit all the main points of interest.
Free!
Book
like

9.50 / 10 24 reviews
Travel through time to the golden age of Cadiz on this guided walking tour. Discover how it became the gateway to the Indies in the 18th century.
€ 25
Book
like

9.80 / 10 9 reviews
Sail along the beautiful Bay of Cadiz on a private boat with a certified skipper. This is a brilliant trip on the Atlantic just for you and your partner.
€ 250 per group
Book