From the Taj Mahal to the Amber Fort: discover the magic of two of India's most enchanting cities with your own exclusive English-speaking guide on this three-day tour of Agra and Jaipur from Delhi. 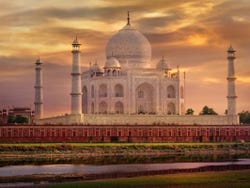 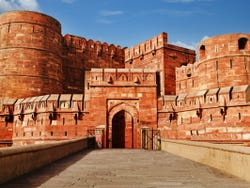 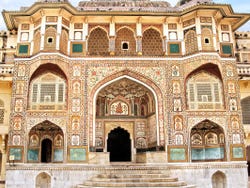 In the morning on day one of your tour, you'll be picked up from your hotel in Delhi and set off towards the city of Jaipur. After around a five hour journey, throughout which you'll enjoy the views of the beautiful Indian countryside, you'll reach Jaipur, where you'll be taken to your hotel (accommodation not included).

Once you've got settled in, you'll embark on a guided tour of the Rajasthani capital. Visit the luxurious Jaipur Palace, the curious Astronomical Observatory, which dates back to the 18th century, and the majestic Palace of the Winds, also known as the Hawa Mahal. Did you know that it has more than 950 windows in its façade?

Truly enchanted by the sights and secrets of Jaipur, you'll be dropped off at your accommodation to relax ready for the next day's sightseeing.

After being collected from your hotel in Jaipur, you'll head out to explore more of the city. Discover the Amber Fort, which is the city's most emblematic monument and one of the best conserved fortresses in India. From its privileged location atop one of Jaipur's highest hills, the Amber Fort unites the most beautiful elements of Hindu and Muslim architecture.

You'll then head down to the lakeside, where you'll discover the elegant Jal Mahal, or Water Palace. You'll soon discover why it earned this name!

Having made the most of your time in Jaipur, it'll be time for the next part of your three-day adventure. You'll set off on the four hour journey to Agra, where you'll be dropped off at your hotel to relax and to get a first look at the city at your own pace.

Get up bright and early on day three of your excursion, ready for a 6 am pick up for a uniquely magical experience: watching the sunrise over the Taj Mahal. As daylight slowly illuminates this iconic mausoleum, you'll understand why it's considered one of the Seven Wonders of the Modern World. While you admire its captivating beauty, your guide will explain its romantic history and reveal the details of its architecture.

Return to your hotel for breakfast and to pack up your luggage after an unforgettable morning. Then, you'll be ready to explore Agra Fort, the city's other important monument. The striking red colour of this 16th century walled city contrasts magnificently with the gleaming white of the Taj Mahal.

After visiting the most emblematic places of interest in Agra, you'll make the return journey to Delhi. Following the three to four hour journey, you'll be dropped off at your hotel or at the airport - you decide!

This is a private tour organised for you and your partner, family or friends.

Accommodation in Jaipur and Agra.

If there are still places available, you can book until the previous day (local time in Delhi).

Positive experience. I want to mention the driver Ravindra who was really very kind and helpful and helped us solve some problems. The experience was also positive with the guide Gurav Lal who had great patience given our passion for photography. Opinion translated. Show original.

9.70 / 10 67 reviews
Throughout history there have been grand displays of love. With this tour of the Taj Mahal tomb from Delhi you will discover one of the most amazing in India.
US$ 120 per group
Book
like

8 / 10 3 reviews
Enjoy the traditional dances and costumes of India at an authentic Bollywood show at the Kingdom of Dreams, one of Delhi´s most famous theatres.
US$ 77.50
Book
like Free

8.40 / 10 20 reviews
Do you want to discover the secrets of India's capital? This free walking tour is the most entertaining way to explore its chaotic streets and iconic monuments.
Free!
Book