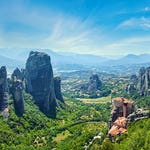 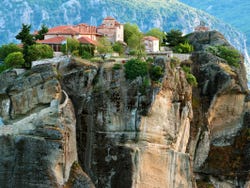 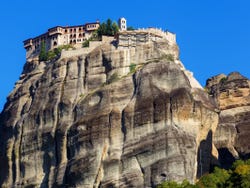 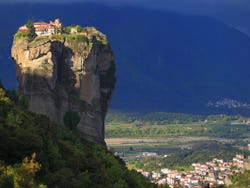 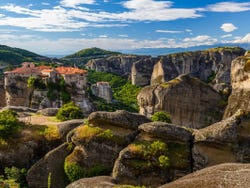 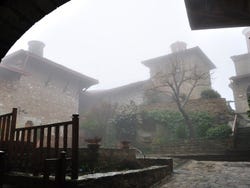 A minibus will pick you up at your hotel in Kalambaka, to begin the journey to Meteora, where you can find one of the most iconic and famous sights in Greece: the hanging monasteries of Meteora.

Following a brief journey of approximately 20 minutes, you'll understand its nickname: these monasteries can be found atop rocky formations 600 metres up.

Over the four hour tour, and English speaking guide will explain the stories and interesting facts about Meteora and its monasteries. The area is one of the most beautiful and impressive in all of Greece, so much so that the producers of Game of Thrones even chose Meteora as one of the places to shoot the series: it was the famous Eagle's Nest Prison, where Tyrion Lannister was kept.

At its peak, 24 monasteries co-existed in Meteora, but with the passage of time and various wars (much was destroyed during the Second World War), today only six can be visited: Great Meteoron, Varlaam, Rousanou, St. Nicholas Anapausas, St. Stephen and Holy Trinity.

The tour finishes at around 1 pm, at which point we'll accompany you back to your hotel in Kalambaka.

Free WiFi in the minibus.

Entry to the monasteries (€3 each).

€ 25
Free cancellation up to 15 days before
Book

The guide spoke Spanish perfectly and explained all the history and our curiosities very well! Opinion translated. Show original.

A highly recommended tour, it is well worth it. The guide was a Greek girl who spoke Spanish perfectly. She knew a lot of interesting things and she and her colleagues have been very kind. We have loved it, we have learned a lot of interesting information and also, apart from the. Information about meteora, its monasteries and towns in the area, has indicated places and also typical food (we riddled it with questions), he was very patient with us and friendly. Very, highly recommended !!! Opinion translated. Show original.

Very friendly guide and driver. Thanks to her we were able to better understand the meteora monasteries and convents Opinion translated. Show original.

9.30 / 10 3 reviews
Explore the incredible rock formations of Meteora and its monasteries, with a hiking route which dives into the secrets and hidden gems whilst keeping you fit!
€ 25
Book
like