Delve into Spain’s culture and history with a guided tour of the Royal Palace of Madrid, one of the largest palaces in Europe followed by a visit to the Prado Museum, the most important museum in Spain.

Delve into Spain’s culture and history with a guided tour of the Royal Palace of Madrid, one of the largest palaces in Europe followed by a visit to the Prado Museum, the most important museum in Spain. 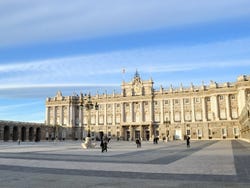 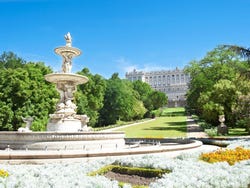 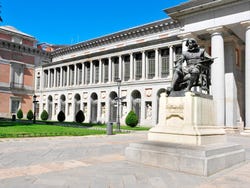 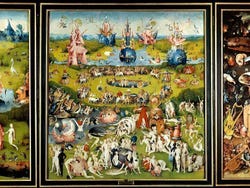 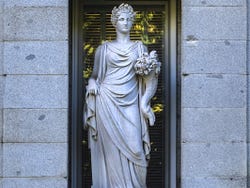 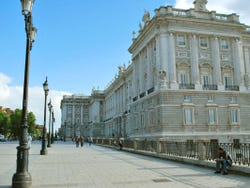 The tour meets at 9:45 am by the statue of Francisco de Goya, just in front of the main ticket offices to the Prado museum. First of all we'll visit this legendary gallery, home to some of the most important works of art in the world.

With a tour lasting an hour and a half, we'll explore the main halls of the Prado Museum. Among the main works on display are "3 de Mayo en Madrid" by Goya, the Meninas by Velázquez and "The Garden of Earthly Delights" by Bosch. And you'll also be able to see other works by masters such as El Greco, Rubens, Rembrandt, Sorolla and other greats in the history of art.

With the tour of the Prado museum over at around 11:30 am, we'll take a walking tour around Madrid, a guided tour on which we'll see some of the most emblematic spots in the Spanish capital, such as the Congress, the iconic Puerta del Sol and Plaza de Oriente.

The tour concludes at 1:30 pm in front of the Palacio Real. From here we'll visit the inside of the stunning building, visiting its main halls, the most striking of which include the Throne Room, the Mirror Hall, and the Gaspari Chamber. Can you guess the number of bedrooms this palace, one of the largest in Europe, has?

Then at 3 pm the tour finishes in the Plaza de la Armería, by the palace.

Admission to the Royal Palace of Madrid.

Admission to the Prado Museum.

You can book up to 2 days before (Madrid local time) if there are still places available. Book now to guarantee your spot.

Wheelchair accessible. This must be indicated in the reservation. Accessible toilets. An accompanying person is required.

If you cancel 24 hours before the activity starts, we will refund you 50%. If you cancel under this time or do not show up, you will not be refunded.

Our tour guide was excellent! Her narrative greatly enhanced our experience! Recommended!

The guides of both were amazing. Extremely knowledgeable and interesting. They made the tour fun and interactive. It wouldn't be the same if they don't explain all the history. Very well worth the money. Highly recommend!

9.30 / 10 324 reviews
Take a free walking tour of Madrid and discover its most emblematic areas, monuments and buildings accompanied by a local bilingual guide and learn about its history and legends.
Free!
Book
like

8.70 / 10 522 reviews
Enjoy a morning or afternoon in Toledo, one of the best preserved medieval cities in Spain, packed with stunning landmarks and art work by El Greco.
US$ 56.20
Book
like

9.20 / 10 12 reviews
Enjoy the art of flamenco with this Madrilenian flamenco show which takes inspiration from the Torres Bermejas in Granada. Dance, song, and guitar for you.
US$ 29.30
Book