Mont Saint Michel Abbey, the iconic Gothic church perched atop the tidal island of the same name, is one of France's most recognisable monuments. Immerse yourself in its fascinating history! 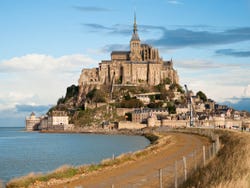 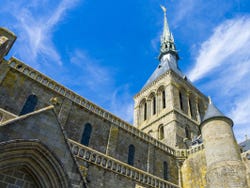 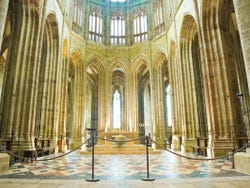 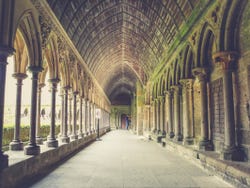 You've probably seen photos before: a dramatic-looking rock jutting out of the sea, with mythical Gothic buildings clinging to its sides... this fairy-tale setting is Mont Saint Michel, a tidal island located at the mouth of the Couesnon River on the Normandy coast. It is one of France's most visited monuments and has been considered a sacred place for over a thousand years... are you ready to discover why?

Your skip the line ticket allows you to explore the abbey at your own pace. Admire the striking fusion of Romanesque and Gothic architecture represented across the different parts of the building, which have been built on top of each other since the original pre-Romanesque church-abbey was founded in the 10th century.

In addition to the historic church, which was only rediscovered at the end of the 19th century, the abbey houses yet another monumental complex: the "Marveille", where the monks lived. Here, you'll find the buildings constructed under Robert de Torigni, a 12th century Abbot, as well as the cloister and the refectory, the monks' dining hall.

We also recommend delving deep into the lower levels of Mont Saint Michel Abbey, where the crypts and the Saint Martin Chapel are hidden. As you explore the mythical site, see if you can spot clues as to its occupation for several centuries from the 15th century onwards... it hasn't always been home to monks!

Depending when you choose to visit the monument, you may also have the opportunity to attend one of the regular masses held for pilgrims in the church.

When making your reservation, you should indicate to us within which of the following time slots you would like to visit the Abbey.

When making your reservation, we'll get in touch within 72 hours to indicate the exact visit time which has been assigned to you. This specific time is always within the time slot you have chosen.

Due to the movements of the tides, on certain days of the year access to Mont Saint Michel and its abbey are restricted for safety reasons. Consult the tide times and possible closure days via the following link:

Reserving this ticket allows you to avoid the queues which usually form at the Mont Saint Michel Abbey ticket office. You will still have to wait in line to go through the security controls at the entrance to the monument.

Disabled guests are eligible for free entry, along with a carer. If this is the case, you should get your ticket directly at the abbey.

The skip the line is perfect Opinion translated. Show original.

Superb visit to a magical place full of history ... a guide full of humor and knowledge ... I highly recommend Opinion translated. Show original.

Quick. We had to rent an audio guide to find out something. Opinion translated. Show original.