Dive into the history of one of the most fascinating cities of the ancient Roman Empire on this excursion to the Herculaneum ruins.

Dive into the history of one of the most fascinating cities of the ancient Roman Empire on this excursion to the Herculaneum ruins. 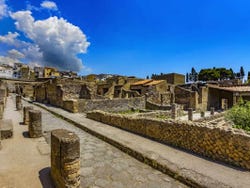 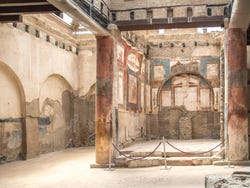 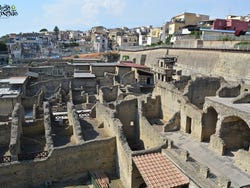 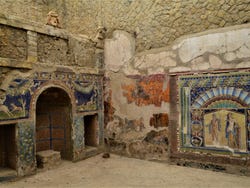 We'll pick you up at your hotel around 9 am and set off for the archaeological site of Herculaneum, one of the three Roman cities buried by the catastrophic eruption of Vesuvius in 79 AD. Ready for an ancient adventure?

We'll start by exploring the cobblestone streets of the site, lingering at the houses and thermal complexes that survived the terrible pyroclastic flow of the volcano. Did you know that the ancient Herculaneum even had a gymnasium?

During the visit, as you admire how incredibly well-preserved the materials and facades of the buildings are, we'll delve into the artistic styles and construction techniques in vogue at the time.

We'll also stop in front of some of the site's most emblematic monuments, including the Hall of the Augustals, the baths, the House of Aristides and Neptune, the Samnite House and the beach where more than 300 people died.

After two hours of exploring, we will conclude the activity by returning to Pompeii.

Entry to the archaeological site of Herculaneum: € 14 (US$ 16) per person

US$ 58.20
Free cancellation up to 48 hours before the service starts
Book

9.40 / 10 23 reviews
Do you want to step back in time to the Roman Age for a few hours? Visit the UNESCO listed Pompeii Ruins and discover the secrets of this ancient city.
US$ 60.50
Book
like

No rating yet
Get to know the history of the Castle of Lettere, a military fortification built on the Lattari Mountains to protect the ancient Duchy of Amalfi.
US$ 43.30
Book
like

Our private tour of Pompeii will allow you to discover all the secrets of one of the most important archaeological sites in the world, with an exclusive English-speaking guide just for you!