Explore Costa Rica's animal world in Tortuguero National Park, home to the green turtle it is named after along with many other protected species, such as sloths. 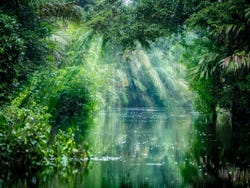 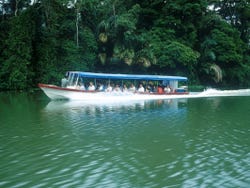 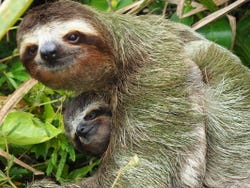 After picking you up at your hotel, we'll set off with a natural scientist guide to Braulio Carrillo National Park, an extensive area housing a magnificent forest and waterfalls that can be seen from afar.

At over 3,000 metres high, the Barva Volcano will be what takes our breath away. During the tour, we'll also see some of the over 135 animal species that live in the Braulio Carrillo National Park.

We'll stop for a typical Costa Rican breakfast to recharge our batteries. We'll have eggs and the famous gallo pinto, a dish made of beans and rice, along with juice and coffee.

Then we'll continue our tour at the banana plantations, where we'll learn about the growth and exportation process of one of Costa Rica's most important products alongside chocolate and coffee.

Next, we'll board a boat that will sail us off to the Tortuguero National Park, recognised for its rich biological diversity.

The star of the park is the green turtle, but it coexists with many other fascinating animals such as the manatee, the sea cow and the crocodile. And the park is also home to endangered mammals such as sloths, monkeys and white-nosed coati.

At lunchtime, we'll enjoy a delicious traditional meal to recharge our batteries. There'll be a buffet-style menu with a choice of salads, meat, garnish, dessert, coffee and drinks.

After lunch, we'll visit the village of Tortuguero, which is actually a street where only cycling and walking are allowed. We'll also see some bars and restaurants that are popular among residents of this charming place.

At the end of the trip, we'll make our way back to your hotel in San José.

It is a very beautiful walk, with a lot of vegetation, I could see small crocodiles, many birds and turtles, the boat ride highly recommended, the way in the van, although tired but without any problem, our guide was Ivan, he was super professional and He was showing us many animals during the walk, we had time to go to a beach, to walk x tortuguero and even to drink pita water, by the way the delicious gallo pinto breakfast !! In short, if I liked it :) Opinion translated. Show original.

Excursion. Absolutely recommended. Special mention to the Guide who accompanied us, Josué, for his professional work and all the good information he provided us throughout the day, as well as to the Bus Driver. Rigoberto, and del Bote, Sebastián. Do not miss it and enjoy. Opinion translated. Show original.

Highly recommended tour! I personally loved it in every way. The area is worth visiting. Joshua guides a 10 in everything. The explanations, the attention with everyone ... Perfect! Opinion translated. Show original.

Very good tour. Food very good. I recommend to better organize the departure from San José. Due to other people's luggage and lack of space, perhaps we lost 30 min or more. Opinion translated. Show original.

9.80 / 10 25 reviews
Spend a day in paradise: enjoy a luxury cruise over the mesmerising turquoise seas of the Gulf of Nicoya to the spectacular Tortuga Island.
US$ 136.25
Book
like

8.50 / 10 8 reviews
Enjoy the best views of San José exploring its most emblematic monuments on a comfortable panoramic bus tour.
US$ 68
Book
like New

Up for an adventure? Feel the adrenaline as you go down the rapids of the Pacuare River, one of the best places in Costa Rica for rafting!