Beautiful beaches, hip neighbourhoods and the emblematic Harbour Bridge: see Sydney from a new perspective and discover the city's most spectacular sights on an iconic motorbike tour. 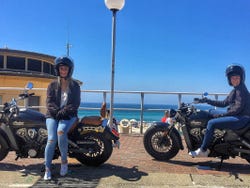 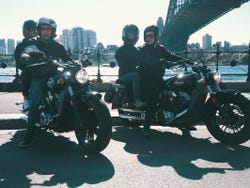 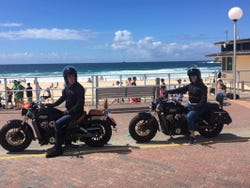 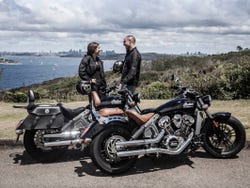 Sydney Motorbike Tour: what to expect?

When making your reservation, you'll have the choice between four different sightseeing routes around Sydney. All of the options begin at 9:30 am with a hotel pick up service, before you hop onto an iconic Indian Motorcycle, one of the most legendary American motorbike companies. A true dream of a vehicle! The bike will be driven by your guide, so you don't have to worry about a thing. All you need to do is put on the gloves, jacket and helmet that we'll give you and enjoy the ride!

At the end of the tour, you'll be dropped back off at your hotel.

Your Indian Motorcycle will thunder in all its glory around the coastal neighbourhoods located around Sydney Harbour. Firstly, you'll head to the mythical Harbour Bridge, an emblematic bridge located next to the Sydney Opera House, which has become a symbol of the Australian city.

Continuing your thrill ride around the harbour, you'll reach the city's oldest district, The Rocks, where you'll be able to admire the picturesque streets that lead down to the waterfront. You'll also get to explore the area known as Woolloomooloo and Kings Cross, which is famous for its lively nightlife.

Departing from your hotel in Sydney, you'll head straight to one of the city's most popular coastal areas: the world-famous Bondi Beach. Cruising alongside the stunning Australian coastline, you'll  visit Bronte and Tamarama and their beautiful beaches.

As the finishing touch on your tour, you'll return to your hotel crossing over the Sydney Harbour Bridge, from which you'll enjoy unparalleled views of the Sidney Opera House.

This is the ideal route for those looking to discover the best viewpoints of Bondi, Bronte and Tamarama beaches. While you enjoy the wild ride on your Indian Motorcycle, you'll learn all about daily life in the region before it became a popular surf destination.

Roar around the northern coastline of Sydney on your beast of a motorbike, making stops along the way to take in the views of some of the most beautiful beaches in the region. Admire Manly Beach and delve into North Head National Park to appreciate the wild landscapes of Australia.

Continuing north, you'll discover Shelly Beach, South Steyne and Queenscliff, where you'll find yourself in surfer's paradise! Marvel at the sparkling waters and golden sand beaches, before it's time to return to Sydney city centre.

What if the weather is bad?

In the case of bad weather conditions, you'll be offered the possibility of rearranging the date of your tour.

The minimum age to take part in this activity is 14 years old.

You can book up to 3 days before (Sydney local time) if there are still places available.

from
US$ 73.90
No hidden fees or surcharges
Free cancellation up to 3 days before
Book

No rating yet
Spend an unforgettable evening with three experiences in one: harbour cruise, dinner and cabaret show. See Sydney's iconic skyline from a unique viewpoint.
US$ 95.20
Book
like

9 / 10 2 reviews
Do you dare to climb to the top of one of Sydney’s most iconic monuments? Discover the spectacular views the Harbour Bridge has to offer and enjoy a unique adventure.
US$ 105
Book
like New

New
Pilot a speedboat across the beautiful Sydney Bay and enjoy exclusive views of the famous Harbour Bridge and Sydney Opera House.
US$ 70.77
Book