With this free walking tour of Villajoyosa, you'll immerse yourselves in the coloured houses that make this part of Alicante one of the most beautiful on the Costa Blanca.

With this free walking tour of Villajoyosa, you'll immerse yourselves in the coloured houses that make this part of Alicante one of the most beautiful on the Costa Blanca. 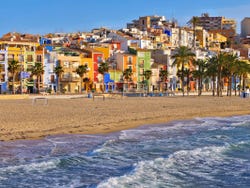 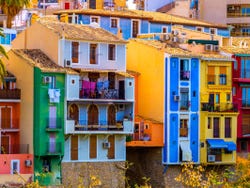 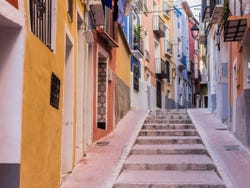 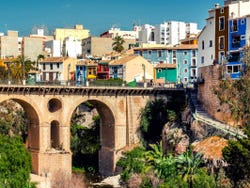 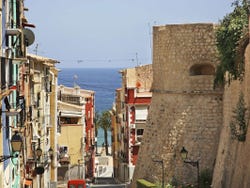 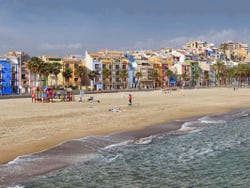 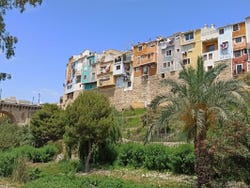 The free walking tour begins at the indicated time next to the Roman Baths in Villajoyosa.

We'll explore the old town of Villajoyosa, following the remains of its renaissance walls. And it's alongside these walls that we'll discover the architecture of the church-fort of Our Lady of the Assumption, built in the reign of Felipe II. The unusual part? That the other side of the church forms part of the defensive walls themselves!

The tour then continues, among the famous coloured houses of Villajoyosa, decoration which shines in the light of the Mediterranean coast. As we weave among the streets, your guide will tell you all about the unusual celebrations which take place in the town. Among them - the Moors and Christians Fiestas, which have been declared of National Touristic Interest.

And this picturesque village is not only known for its parties and monuments, but for its food! And one of its star products is cocoa - which shares a long history with the town. We'll explain all about it, and the importance of the Chocolates Valor factory.

Following two hours, the free tour will conclude in the historic centre of Villajoyosa.

English speaking guide, expert in the history of Villajoyosa.

We loved it, our guide Fran, he had a lot of knowledge and he told us everything very well and very well explained, thank you Opinion translated. Show original.

The tour was great !! The truth is that it was a very pleasant time, and Fran was very professional. We learned a lot about the history and origin of Villajoyosa, and it is a highly recommended activity to repeat safely. Recommended 100% !!! We will repeat for sure !! Opinion translated. Show original.