Get to know the enchanting and symbolic side of Ghent's old town with this Ghent Free Evening Tour. Discover mysteries and legends around the beautiful hometown of Charles V. 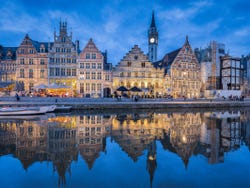 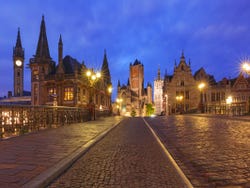 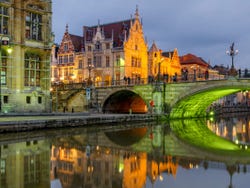 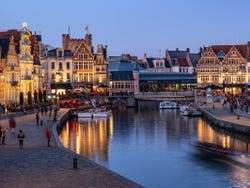 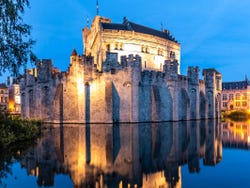 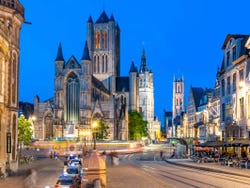 Ghent is a spectacular city where echoes of the past still remain. Its medieval layout can be seen perfectly from the Sint-Michielsplein bridge, where we'll meet at 6 pm. After a brief introduction about the origin of the city, we'll head towards the Graslei pier to learn about its history.

Following the banks along the canals of the River Lys, we'll arrive at the Appelbrugparkje park to learn how those condemned to death spent their last hours. Nearby we'll see the Hoofdbrug, also called the "Bridge of the beheadings". From here, we'll enjoy excellent views of the Gravensteen, the castle of the counts of Ghent.

The tour will continue to the old Royal Palace ruins, where Charles V was born. The king, and emperor, wasn't very kind to the neighbours who rebelled against him, known as "the Ghent hanged men". The most powerful man in Europe in the 16th century will be the protagonist of several legends and curiosities that we will reveal to you during the tour.

The next stop will be in front of the Augustijnenklooster, an old monastery where we'll explain how the religious repression in Ghent was. The King of Spain, Philip II, and his most prestigious soldier, the Duke of Alba, nipped in the bud any attempt at Protestantism in the provinces of the Netherlands.

Finally, at 7.30 pm the tour will end at the Patershol, one of the most beautiful medieval quarters in Ghent. But also one of the areas with more enigmas to solve...

Reservations are limited to a maximum of 6. If you would like to get to know this beautiful Flemish city with an exclusive guide just for you and your partner, family or friends, you can book the private tour of Ghent with an English speaking guide.

speaking guide specializing in the history of Ghent.

9.10 / 10 20 reviews
Discover the history and hidden secrets of one of the prettiest towns in Belgium with this free guided walking tour of Ghent accompanied by an expert English-speaking guide.
Free!
Book
like

9.30 / 10 8 reviews
Explore the enticing city of Ghent in the heart of Flanders on a 3 or 5-hour private walking tour, and discover the most important sights in its historic center
US$ 230.90 per group
Book
like

9.30 / 10 402 reviews
On this guided tour we'll explore the historic centre of Ghent, one of the most beautiful and dynamic cities in northern Europe.
US$ 12.20
Book