Power struggles, intrigue, and passion for artistic discovery... get to know the secrets of Pisa with this guided tour of the Piazza dei Miracoli and Pisa's historical centre. 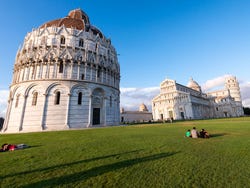 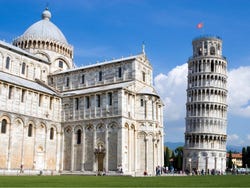 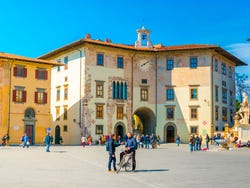 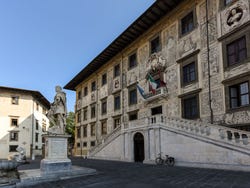 The tour meets in front of the Porta Santa Maria Arch, and from here we begin our guided tour of the Piazza dei Miracoli which will take approximately an hour.

The St. John's Baptistery will be the first major monument we will encounter, as soon as we enter the square. Originally designed as a place of baptism, it is the largest of all the Italian baptisteries. Having admired its amazing gothic dome we will continue to learn about the history of the various monuments, passing alongside the cemetery, and later entering into the Pisa Cathedral itself. There we will appreciate the caryatids (statues of female figures, each one serving as architectural support), each one representing one of the virtues, from temperance to kindness, and next to this you can find the graveyard, from outside of which you'll be able to drink in the Piazza dei Miracoli in all its splendour.

Leaving the Piazza behind, we take Via Santa Maria, from where we will take an hour-long guided tour of Pisa's historic centre. The tour stops in the Piazza dei Cavalieri to enjoy the spectacular facade of the Palazzo dell'Orologio (clock palace) and the Palazzo della Carovana, headquarters of the Scuola Normale Superiore - one of only three officially sanctioned special-statute public universities in Italy.

We then continue to the banks of the Arno river, ears ringing with anecdotes about Piazza Garibaldi. Then our journey back into the history of the city, touring one of the main shopping streets in the city: the Borgo Stretto.

When making your reservation you can complete your guided tour of Pisa by climbing the leaning tower itself. Following your tour of the most famous corners of the Tuscan city, you'll have the opportunity to climb to the top of the world's most famous bell tower, the symbol of Pisa, and from where you'll get the best views of the city.

For security reasons, children under 8 may not climb the leaning tower.

Entry to the Pisa Cathedral.

Entry to the Leaning Tower of Pisa (optional).

Entry to the Baptistry, Campo Santo and other monuments on the tour (which will be visited from outiside)

If there are still places available, you can book until the previous day (local time in Pisa).

Yes (it varies according to every attraction included).

from
US$ 33.50
No hidden fees or surcharges
Free cancellation up to 24 hours before the service starts
Book

9.40 / 10 54 reviews
Art and architecture come together on this guided tour of the Pisa Cathedral and the Piazza dei Miracoli, one of the main visitor attractions in Tuscany.
US$ 16.80
Book
like

8.90 / 10 11 reviews
Reserving our private tour will give you a guide all to yourselves, for an exclusive tour of Pisa with your partner, family or group of friends.
US$ 156.30 per group
Book
like

9.60 / 10 40 reviews
Let yourself be captivated by the architectural jewels of Pisa on this guided tour of the Cathedral and Baptistery. You can also climb the Leaning Tower!
US$ 29
Book