Discover the best of beautiful Toulouse on this guided walking tour of the "Pink City". You'll see its most important monuments, landmarks and squares. What's more, it's FREE! 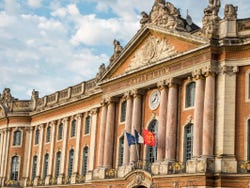 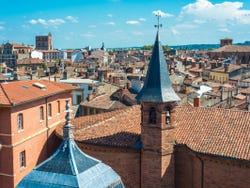 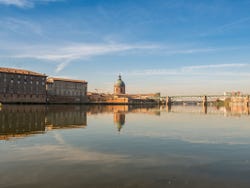 Immerse yourself in the history, culture and architecture of the French city of Toulouse, exploring its elegant streets and squares with an English-speaking guide. You'll begin your free walking tour in the Place du Président Thomas Wilson, before making your way to the Cathédrale Saint-Étienne de Toulouse, the Toulouse Cathedral. Marvel at its striking mix of architectural styles, including Gothic, Romanesque and Baroque, the result of its many centuries of history and the fact that it was originally two separate churches!

Not far from the Cathedral, you'll reach Toulouse's Fine Arts Museum, the Musée des Augustins. Housed in a former Augustine Monastery, the 14th century Gothic-style building is as much a piece of art as the more than 4000 works on display inside.

Continue your free walking tour to the magnificent Hôtel d'Assézat, a 16th century Renaissance palace that now houses an art gallery, before strolling down to the banks of the Garonne River to take in the views of the famous Pont Neuf, or New Bridge, which - despite its name- is almost 500 years old.

Wandering alongside the river, you'll soon arrive at the enormous Church of the Jacobins, an iconic building whose incredible 13th century vaulted ceiling has been named "The Palm Tree" for its unique design.

Finally, you'll visit the largest Romanesque church in the world, the Saint Sernin Basilica, where your guide will reveal the myths and legends surrounding the building, before your tour comes to an end.

Very good walking tour, best I have done so far in Europe.

We had an excellent time with Harry. Enjoyed the tour, the stories, the touristic vibe, ... We had to translate everything he told to the teenager in the family, and were surprised how much we still remembered of the fun facts told! good job!

Great tour, very informative and funny at the same time! Harry was an amazing guide!!

Harry was a great guide, extremely knowledgeable and very friendly and approachable. He gave you lots of information but not so that you felt overloaded with facts and history, he has a great approach. The group was very multinational and of all ages which was lovely. Everyone was chatting to each other so it’s really nice if you’re a solo traveler, which I normally am. This time I traveled with my Dad and he also thoroughly enjoyed it. I would definitely recommend this tour

10 / 10 1 review
Enjoy the most beautiful villages in Occitanie with this Albi and Cordes-sur-Ciel Day Trip from Toulouse. You'll be impressed by the medieval French charm.
US$ 25.40
Book
like

No rating yet
Explore the impressive fortified city, which houses a medieval citadel declared a UNESCO World Heritage Site, with this Carcassonne Day Trip from Toulouse.
US$ 25.40
Book
like

9.30 / 10 3 reviews
Explore the beautiful historic centre of Toulouse with this private tour in English. A route exclusively for you and your partner, family or friends!
US$ 118.50 per group
Book