Discover the magic of Chiang Mai in authentic Thai style. Delve into the lively local culture taking a tuk-tuk tour of the city's most iconic temples, markets and monuments. 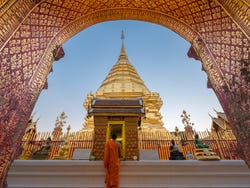 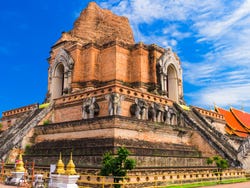 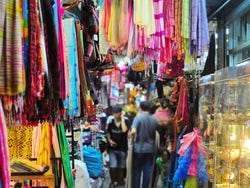 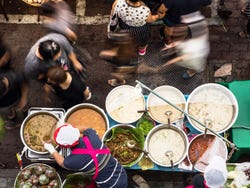 After being picked up from your hotel, you'll hop into a tuk-tuk ready to begin your tour of the historic city's most important sights. Chiang Mai was the capital of the Kingdom of Lan Na (the "Kingdom of a Million Rice Fields") from the 13th to 18th centuries, and to this day many monuments remain from this era, paying testament to the historic glory of the region. First, you'll head to Tha Pae and Chiang Mai Gates, remnants of the ancient fortified wall that protected the old citadel.

Continue your tuk-tuk tour into Chiang Mai's old town, where you'll make a stop at the magnificent Wat Chedi Luang, a Buddhist temple known for its enormous stupa and the carved stone elephants that guard it. Next, visit the Three Kings Monument, or "Anusawari Sam Kasat", in honour of the imperial royals who founded the former capital.

Travel through time next, back to 1345, the year in which one of Chiang Mai's oldest temples was built: Wat Phra Singh. Admire the beauty of the traditional Buddhist monastery buildings, home to a widely-revered Buddha statue and an immense lavish gold-leaf stupa.

For the finishing touch on your tuk-tuk tour of Chiang Mai you'll immerse yourself in the daily life of the locals visiting the lively Warorot Market. As you explore its vibrant stalls, you'll have the opportunity to buy typical local produce and handicrafts, from Thai lanterns for souvenirs to dried fruits as a tasty snack.

Your tuk-tuk will drop you back off at your hotel after your three hour tour.

To enter Chiang Mai's Buddhist temples you must follow their dress code. We recommend wearing closed shoes, and modest clothing that covers shoulders, knees and ankles. It is not permitted to enter temples wearing short pants or skirts.

Entry to the Three Kings Monument.

8.90 / 10 7 reviews
Meet the friendly Thai animals with this Elephant Sanctuary + Rafting Day Trip. You'll also get your adrenaline pumping along Mae Taeng River.
US$ 81.40
Book
like

No rating yet
Discover the wonders of the city of 300 temples with this Chiang Mai Guided Tour. Get to know the most remote areas of the city.
US$ 70 per group
Book
like

9.50 / 10 135 reviews
This unique experience caring for, feeding and bathing the Thai elephants at this sanctuary in Chiang Mai will leave you lost for words!
US$ 51.70
Book