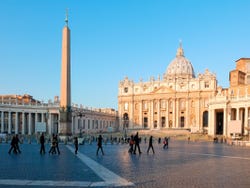 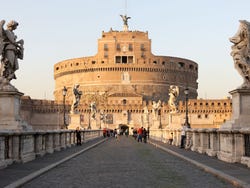 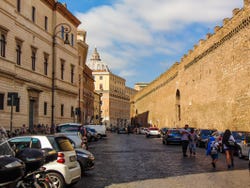 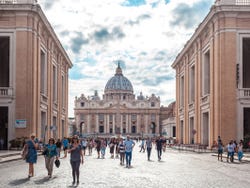 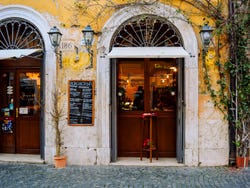 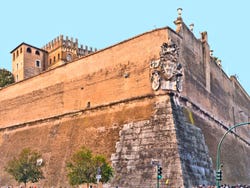 At 9 am we'll meet at Viale Giulio Cesare and start our Vatican City Free Tour. We'll discover how the city arose on the banks of the Tiber River, the links that exist between the Sant'Angelo Castle and the Pope, and many other interesting historical details.

We'll first skirt the walls that separate Rome from the Vatican, cross the Piazza del Risorgimento and head towards Borgo Pio. The roads through this small, medieval-style neighbourhood will lead us to the outsides of the Sant'Angelo Castle. We'll discuss the origins of this fortress, which was originally built as a mausoleum for Emperor Hadrian and his family, and its unique details such as the striking statue of an angel which crowns the building.

Our next stop will be the entrance of the Passeto di Borgo, the secret passageway built by the Vatican in 1277 so the Pope could travel from his residence to Castel Sant'Angelo undetected. You may remember Tom Hanks walking through it in the film Angels and Demons.

After visiting the Passeto di Borgo, we'll head to the famous St. Peter's Square. This colossal plaza was designed by the architect Gian Lorenzo Bernini and is considered one of the most beautiful squares in the world.

The last place we'll see on our tour will be St. Peter's Basilica, where we'll be able to admire its breathtaking façace and impressive dome. We'll talk about the different artists, from Michaelangelo to Bramante, who participated in the construction and design of the Catholic Church's main shrine.

At 10:30 am our tour will end in the Piazza del Risorgimento.

On this Vatican City Free Tour, we're unable to accept bookings for more than 6 people. If you are in a larger group, you can book our Private Walking Tour of Rome.

Tours of the Vatican and Castel Sant'Angelo

If you'd like to go inside some of the places you'll see on our free walking tour, you can reserve a guided tour of the Vatican, which includes entry to the Vatican Museums, Sistine Chapel, and St. Peter's Basilica. If you're interested in heading inside Emperor Hadrian's mausoleum, we recommend checking out our Castel Sant'Angelo Tour.

It was excellent! The guide was extremely knowledgable. I asked her so many questions about Rome, politics, nature, and she could answer them all. One of the best guides in a long time.

Well organized with the radios. Very prepared guide, able to tell many details without ever getting bored. Opinion translated. Show original.

It was fantastic because the boy was very kind and explained things to you in a very affectionate way. Opinion translated. Show original.

I travelled with teenagers
Show all the reviews
like -24%, Skip the line

9.30 / 10 19,389 reviews
The city of the Caesars, of Baroque and, of course, The Eternal City. Discover Rome with this free walking tour of the Italian capital.
Free!
Book
like

9 / 10 134 reviews
With this shuttle service between Ciampino Airport and Rome, you'll be in the centre of the Italian capital in less than an hour. The eternal city awaits you!
US$ 7.10
Book