Seeing the sunrise over the holy city of Varanasi is an unforgettable experience. Be seduced by its incredible colours on a boat trip of the Ganges, and enjoy watching the Hindu Aarti ceremony, a sacred rite that will leave you speechless. 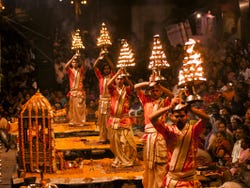 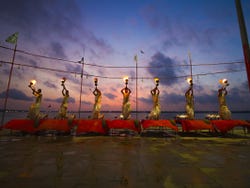 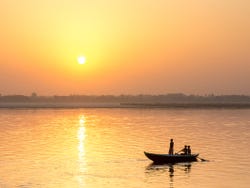 After meeting your guide in front of the Kashi Café in Varanasi in the early hours of the morning, you'll head to the riverside ghats, stepped embankments that lead down to the water, where holy purification rituals are performed.

As you watch the spectacular sunrise over the waters of the Ganges, you'll be witness to one of the most famous rites in the Hindu religion: the Aarti ceremony. The ritual is performed in honour of the river itself, known as the Goddess Ganga, one of the world's holiest rivers according to Hinduism.

Ganga Aarti is performed by seven Hindu priests, who light lamps and incense and chant hymns as part of the ritual. An unforgettable experience of this ancient religion!

You'll then board a boat which will take you on a tour of approximately one hour of the river Ganges. Throughout this incredible journey, you'll watch as the first rays of sunlight illuminate the city. While you sail, your expert guide will also entertain you with fascinating facts about Varanasi and the spirituality that surrounds it.

The boat trip will come to an end at Assi Ghat at 7 am.

Tours or activities will not consist of more than 5 people per group.

You can book up until 5 hours before the activity as long as there are still places. Book now to guarantee your spot.

US$ 13.70
Free cancellation up to 24 hours before the service starts
Book

The guide RJ a show A facility to explain everything and apart with energy He took us to tour the alleys of Varanasi giving us details of the life of Varanasi Of the life and customs of the people Then he accompanied us to get transportation and reach the hotel Excellent fully recommended Opinion translated. Show original.

It's well worth it. Along with the taj mahal the best in india. I recommend walking the streets near the main cat. very intense and excited Opinion translated. Show original.

10 / 10 2 reviews
If you like photography, this walking tour is perfect for you: see the most picturesque places in Varanasi and capture them in all their splendour.
US$ 10.90
Book
like

No rating yet
Visit the most important monuments in Varanasi on this private tour of the city with an exclusive expert guide for you and your family or friends. What are you waiting for?
US$ 47.70 per group
Book