Travel to the place where Buddhism began. This guided tour of Sarnath is the best way to discover the origins of the ancient religion and explore one of its most sacred cities. Unforgettable!

Travel to the place where Buddhism began. This guided tour of Sarnath is the best way to discover the origins of the ancient religion and explore one of its most sacred cities. Unforgettable! 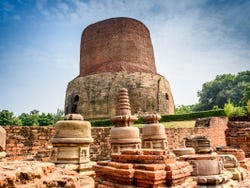 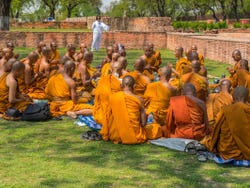 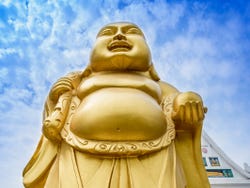 After being picked up from your hotel, you'll be taken via private vehicle to Sarnath, a city less than 10 miles (15 km) from Varanasi.

After around a 30-minute drive, you'll arrive at one of the four holy cities of Buddhism. In fact, this is the birthplace of the world's fourth-largest religion, as Sarnath was the location in which Buddha first taught the concepts and principles of Dharma over 2500 years ago. It is to this day a pilgrimage centre for Buddhists.

Throughout your half-day guided tour, you'll visit the most important temples in Sarnath, including Sarang Nath, a shrine dedicated to the god Shiva, whose name means "Lord of the deer" - your guide will explain why! You'll also see the Japanese and Chinese temples as well as the Mulagandha Kuti Vihar monastery.

Finally, you'll visit the Sarnath Museum, where you'll appreciate the excellent collection of Buddhist art and sculpture. Finishing your guided tour, you'll be dropped off at your hotel in Varanasi.

Entrance to monuments visited on the tour (approx. 10 USD per person).

Per group from
US$ 37.50
Free cancellation up to 3 days before
Book

10 / 10 2 reviews
If you like photography, this walking tour is perfect for you: see the most picturesque places in Varanasi and capture them in all their splendour.
US$ 10.80
Book
like

No rating yet
Visit the most important monuments in Varanasi on this private tour of the city with an exclusive expert guide for you and your family or friends. What are you waiting for?
US$ 47.40 per group
Book