Immerse yourself in ancient ruins and lush jungle to discover the secrets of the Mayan pyramids on this tour of Tikal and Yaxha from Guatemala City with flights, transfers and hotel included! 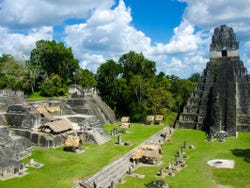 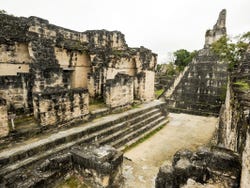 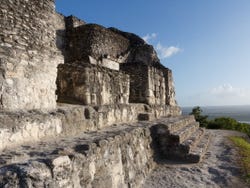 On the first day of your tour, we'll pick you up from your hotel in Guatemala City at 4:30 am, starting our Mayan adventure bright and early. We'll head to La Aurora International Airport to catch our flight to Flores.

After just one hour, we'll land at Mundo Maya Airport and set off to Yaxha. Did you know that these archaeological ruins served as a set for a reality survival show?

Yaxha is sure to captivate you with its more than 500 different structures including nine temple pyramids, thirteen altars and two Mesoamerican ballcourts, and the roads that connected the ancient Mayan city. The crumbling stone ruins are surrounded by abundant jungle and spectacular lagoons which provide a clue as to the city's Mayan name!

Having explored this monumental complex to our heart's content, we'll make a stop to eat (food not included), before heading to Flores to relax at the hotel for the next day's adventure.

After a hearty breakfast at the hotel to kick our day off to an energised start, we'll embark on our hour and fifteen minute journey to Tikal National Park.

Arriving at the park, we'll begin our tour by walking through the jungle to the Mayan ruins of Tikal. A UNESCO World Heritage Site, this archaeological site has over 2000 years of legendary history. You'll discover its secrets thanks to your English speaking guide as you explore, climbing up the steps up to the Temple of the Great Jaguar, which towers above the treetops at over 150 feet (47 metres) tall, and the Temple of the Mask, at 125 feet (38 metres) tall.

We'll spend three hours walking around the park, learning all about Mayan civilisation as we admire the ancient city, one of the largest in the region. What happened in the 10th century that lead to the cities being abandoned? Was it a famine, rebellion, or something else that put an end to this incredible civilisation? Your guide will reveal all on the tour!

At the end of our guided tour of the archaeological ruins, we'll take a well-earned break to eat. We'll then return to Flores airport to catch our flight back to Guatemala City, where you'll then be dropped off at your hotel.

This two day tour includes one nights' accommodation in Flores. When making your reservation, you can choose a hotel of 3 or 4 star category. The planned accommodation is the following:

We recommend booking your tour well in advance as the tour depends on the availability of flights between Guatemala City and Flores. If there are no places available on the flights corresponding to your tour dates, we'll offer you alternative dates or a full refund of the tour price.

The activity includes pick up from hotels in Guatemala City. Check out the list of hotels below. If you aren't staying in any of these hotels, choose the one closest to you for pick up.

The activity takes place with a guide that speaks in english and.

One night's hotel accommodation with breakfast.

10 / 10 1 review
Ever dreamt of hiking up an active volcano? Now's your chance! Climb up Pacaya Volcano on this tour from Guatemala City.
US$ 69
Book
like

No rating yet
Travel back in time to the colonial city of Antigua Guatemala on this day trip from Guatemala City that will also take you to relax at the Kawilal Hot Springs.
US$ 99
Book
like

No rating yet
With this 5 or 6 day tour, you'll discover Antigua Guatemala, Lake Atitlán and more with anEnglish speaking guide, hotel stay and transfer.
US$ 435
Book