Do you want to fly over the Samana peninsula from Punta Cana? With this tour, you'll take a plane over the Dominican Republic, enjoy traditional food and ride a horse. 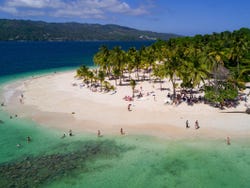 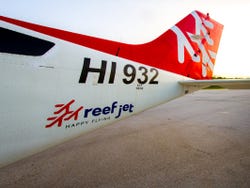 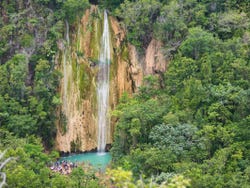 After picking you up from your hotel between 6 and 7 am, we'll go to Punta Cana airport. Enjoy the 40 minutes in the air to Samana, with views of the Dominican Republic as you try an aperitif.

We'll land at Arroyo Barril airport and go to a Batey, also known as a 'sugar worker's town'. These are settlements around sugar mills that was previously a very profitable industry for the Dominican Republic but now belong to some of the poorest communities. Here we'll get the chance to learn about the lives of the farming population, and visit a traditional house where we'll be invited to try Dominican coffee and chocolate.

Next, we'll head to a small ranch in El Limón, where we'll ride a horse through the jungle around Samana for half an hour. We'll then come across Limon Waterfall, which is 52 metres high and is one of the main attractions in the area. You'll have two hours and a half of free time to wander around or take a dip in the beautiful waterfall.

At 12:30 pm, we'll get on the horse and head back to the ranch to enjoy a buffet-style meal. Once we've finished we'll make our way to Samana Bay. Here we'll get on a speedboat to cruise around Cayo Levantado, one of the Dominican Republic's most untamed regions.

Finally, after the boat tour around Samana, we'll head back to Arroyo Barril airport to get on a plane to Punta Cana leaving at 4:30 pm. The day tour will finish dropping you off at your hotel at 6 pm.

From 20th January to 31st March 2020, the itinerary will change due to the whale season. On Mondays and Fridays, we'll head back to Samana and having landed we'll head to the Bay by boat. Here we'll see the hundreds of humpback whales. This amount of whales can only be seen at this time of year!

After, we'll ride a horse to the symbolic Limon Waterfall. After spending some time jumping into the waterfall we'll enjoy a buffet-style lunch at the ranch. Finally, we'll go to the airport to get a flight back to Punta Cana arriving at 6 pm.

On Wednesdays, having seen the whales in Samaná, we'll swap the visit to the Limón waterfall for a speedboat cruise around Cayo Levantado, where you can admire the stunning wild ecosystem.

Pick up at Bayahibe and Uvero Alto

This Samana day tour by plane includes pick up in the Bavaro and Punta Cana areas. If you're staying in another area, then go straight to Punta Cana airport for 7 am or pay a supplement on the day of the activity.

The maximum weight to board the plane is 136 kilograms per person (300 pounds). This tour is not recommended for pregnant women and people with back problems.

A one hour horse ride.

Aperitifs during the flight.

11% discount on the official ticket price.

9.20 / 10 8 reviews
Drive an underwater scooter along the seabed of Punta Cana with this incredible Scuba Doo activity. An unforgettable experience!
US$ 50
Book
like

7 / 10 6 reviews
See the majestic humpback whales as they swim by your side in the sanctuary of the Samaná Bay.
US$ 135
Book
like

7.90 / 10 22 reviews
Discover the Los Haitises National Park, one of the most beautiful corners of the Dominican Republic. Cruise across the Samaná bay and explore jungle caves.
US$ 130
Book