An ancient fortress, historic churches and majestic mosques: spend a day exploring the most important places of interest in Skopje, the political, cultural and economic capital of North Macedonia.

An ancient fortress, historic churches and majestic mosques: spend a day exploring the most important places of interest in Skopje, the political, cultural and economic capital of North Macedonia. 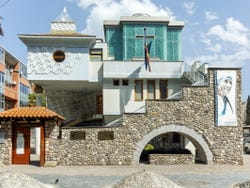 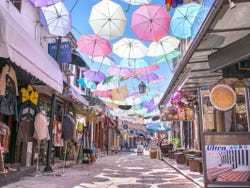 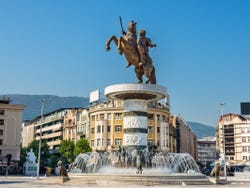 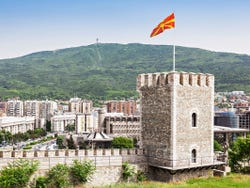 Having been picked up from your hotel in Sofia at 8 am, you'll leave Bulgaria behind, heading southeast towards North Macedonia. After around a three and a half hour drive, you'll arrive in Skopje, the country's capital and largest city.

Enjoy a journey through time as you explore this historic city, discovering its hidden beauty and ancient heritage as well as its contemporary role as the political, cultural and economic centre of North Macedonia. You'll begin by visiting Kale Fortress, which dates back to the 6th century and which offers spectacular views over Skopje from its hilltop vantage point.

From the fortress, you'll make your way to the Church of the Holy Salvation, also known as the Church of the Ascension of Jesus, a Macedonian Orthodox temple that provides a striking contrast to the nearby Sultan Murat Mosque. Not far from the mosque, you'll find yourself entering the Old Bazaar, another reminder of Skopje's Ottoman heritage which has been a centre of trade and commerce since the 12th century.

You'll take a well-earned break next to enjoy lunch at a local restaurant (not included), before continuing your route across the Vardar River to the newest part of the North Macedonian capital. Discover the Neo-Classical style square and the Memorial House of Mother Teresa, who was born and raised in Skopje.

Before heading back to the bus, you'll have the chance to admire the triumphal arch known as Porta Macedonia, which commemorates the country's 20 year anniversary of independence.

You'll return to Sofia at around 7 pm.

Please remember to bring your valid passport on this tour, with at least six months of validity, as you will be crossing the border between Bulgaria and North Macedonia.

US$ 100.70
Free cancellation up to 24 hours before the service starts
Book

The city is very interesting and the history course very educative. The journey is a bit long but once you get to Skopje you appreciate the long trip.

pick up from hotel punctual. The tour guide is very helpful and explain everything very well. I enjoyed this tour very much

Skopjke is a must! Awesome what they have done there. Our guide, Boja, was very informative and very nice.

We liked the city a lot. But, the price of the excursion has seemed excessive to us in relation to the transport services and guides offered. Opinion translated. Show original.

Recommended if you have one more day in Sofia, In just 3 hours you reach Skopje, the capital of Macedonia that stands out for nothing in particular, beyond the bad taste of the authorities in the decoration and urban development of the city. That said, highlight the professionalism, knowledge and experience of our guide (H) Elena, a charming woman who transformed a simple excursion into an experience to remember. Opinion translated. Show original.

9.60 / 10 105 reviews
What better way to get to know Sofia than with a free tour in English?! Explore the main sights in the Bulgarian capital with this walking tour.
Free!
Book
like

8.60 / 10 7 reviews
This day trip to Plovdiv and Perushtitsa will allow you to explore a large part of the Roman history of Bulgaria. Plus you'll enjoy a fantastic wine tasting!
US$ 79.20
Book
like

9.10 / 10 24 reviews
Visit two of the most important monuments in Sofia – Boyana church and Rila monastery. Essential for any trip to the Bulgarian capital!
US$ 33.90
Book