Learn about the history of 19th century Cadiz on this guided tour and discover the secrets of the Spanish Constitution of 1812, also known as "La Pepa". 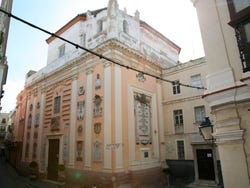 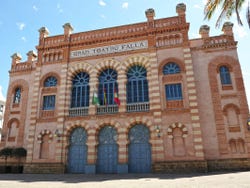 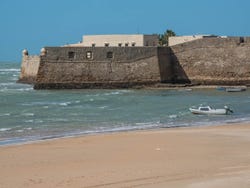 The Spanish Constitution of 1812 was drafted in the city Cádiz. We'll meet in the Plaza de San Juan de Dios square to set off on our tour of 19th century Cádiz.

We'll pass by fascinating historical remains in the old town such as the Arco del Pópulo archway as we head to the Plaza de la Candelaria square, where we'll find the famous Café Royalty. This one-of-a-kind historically preserved romantic cafe is an example of the places where important figures used to meet in the 19th century.

To continue our tour we'll head down Calle Ancho street, admiring historic buildings such as the Birthplace of Manuel de Falla, one of the most famous Spanish composers of the first half of the 19th century. Then we'll make our way to the Plaza de San Antonio square, where we'll learn about the history of emblematic monuments such as the building where the National Lottery was founded in 1811, the Parroquía de San Antonio church and the iconic Casa-Palacio Aramburu palace.

The Plaza Fragela square will be our next stop. Here we'll find out about the popular event held annually in the Gran Teatro Falla theatre: the Cadiz Carnival folksong contest.

Afterwards, we'll visit the San Felipe Neri Oratory: the building where the Spanish Constitution of 1812 was written. Who drafted it? What were its most controversial articles? What political and social developments did it induce? Find out the answer to these questions and many more on the tour!

We'll finish the tour in the north-western part of the city, where we'll visit the Parque Genovés park and the Castillo de Santa Catalina castle. From the battlements of this magnificent fortress, we'll enjoy spectacular views of La Caleta beach!

You can also learn about Cádiz's history on this guided tour of its historic centre.

What's more, book our "Spanish Constitution Tour of Cádiz + Guided Tour" offer, which means you can do both tours on the same day, as the first tour starts at 11:30 am and the second at 5 pm (or at 7 pm from 15th June to 15th of September).

English speaking guide specialising in the history of Cádiz.

You can book up to 2 days before (Cádiz local time) if there are still places available.

from
US$ 11.10
No hidden fees or surcharges
Free cancellation up to 48 hours before the service starts
Book

8.50 / 10 12 reviews
Head to the southern tip of the Iberian Peninsula on this tour and visit the famous British overseas territory of Gibraltar. You'll discover its main landmarks!
US$ 83.20
Book
like New

New
Sail along the beautiful Bay of Cadiz on a private boat with a certified skipper. This is a brilliant trip on the Atlantic just for you and your partner.
US$ 255.40 per group
Book