Visit the mountains of Malaga and Cadiz to discover two of Andalusia's most emblematic white villages: Ronda and Setenil de las Bodegas.

Visit the mountains of Malaga and Cadiz to discover two of Andalusia's most emblematic white villages: Ronda and Setenil de las Bodegas. 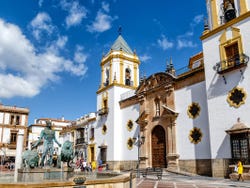 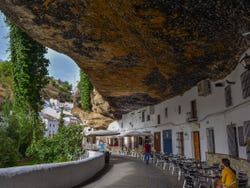 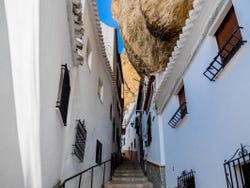 After picking you up in Cádiz we'll set off for Ronda. During the journey, we'll admire the typical Andalusian landscapes of farmland, mountain ranges and traditional white villages.

When we arrive in Ronda we'll be greeted by the emblematic Tajo de Ronda, also called Puente Nuevo, a bridge that has been separating the two parts of the village for over 200 years.

We'll explore the narrow white streets, head through the central Plaza del Socorro and visit the iconic Maestranza, one of the most important bullrings in Spain. We'll also get the chance to look out over the highland from the Mirador del Coño viewpoint.

Next, we'll head to Setenil de las Bodegas, a village built into cliffs. We'll walk along the Calle Cuevas del Sol, on the banks of the River Trejo, and admire the houses and restaurants built into the rocks. We'll also visit some artisan bakeries to try some of the typical wine donuts.

At the end of the trip, we'll return to Cádiz.

When you book, you'll need to select one of the following pick up points:

You can book up to 2 days before (Cádiz local time) if there are still places available. Book now to guarantee your spot.

US$ 56.10
Free cancellation up to 48 hours before the service starts
Book

9.30 / 10 4,187 reviews
What better way to get to know Cadiz than by taking a guided tour with a local guide?! On this free tour, you'll visit all the main points of interest.
Free!
Book
like

9.50 / 10 23 reviews
Travel through time to the golden age of Cadiz on this guided walking tour. Discover how it became the gateway to the Indies in the 18th century.
US$ 29.20
Book
like

9 / 10 142 reviews
Phoenicians, Romans, pirates... Cádiz is home to vestiges from almost every era of history. Discover one of the oldest cities in the world on this walking tour!
US$ 11.70
Book